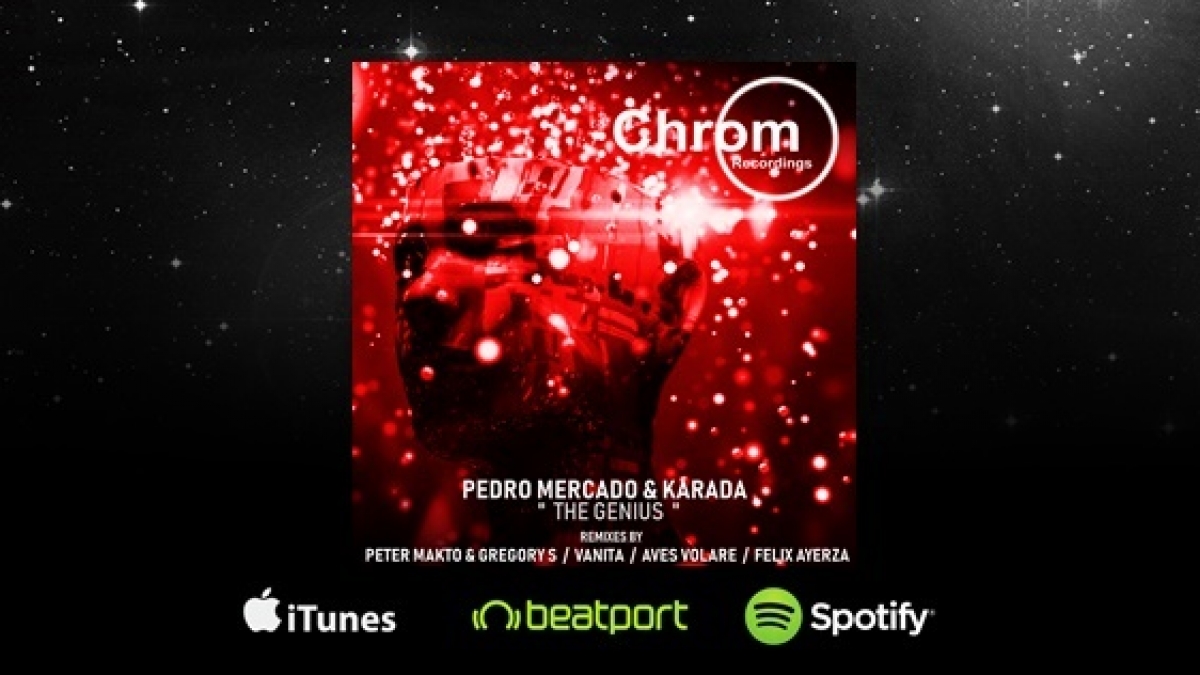 “At the beginning of this year we released an EP called “The System” from our label manager Pedro Mercado together with his loyal Belgian studio partner Karada. On the B-side of this EP was the track called “The Genius” which got the best feedback we ever received so far on a B-side track. We were really overwhelmed by the many great comments, so it was only natural to give “The Genius” an own release, with a brand new club mix and some remixes. On top of that we also added a remix of the title track and the third track of “The System” EP.

Of course, we didn’t just want to re-release “The Genius” as it originally was without doing something extra, so we asked Pedro Mercado & Karada to make a special Club Edit of the original. This new Club Mix is a real powerful dancefloor weapon with still that super catchy melody and that fantastic mesmerizing vocal in the break. A big track also deserves some big remixers, and we found them in the name of Peter Makto & Gregory S, Vanita, Aves Volare & Felix Ayerza.

The first remix of “The Genius” is made by Peter Makto & Gregory S, the highly respected top duo from Budapest, Hungary. With worldwide gigs in big clubs, their own label Truesounds, releases/remixes on other quality labels such as Bondage Music, Heinz Music, SOSO, Ritter Butzke, Highway Records, Proton,… it’s a huge honor for us to have them on board. They turn the original into a driving melodic house masterpiece.

The second remix of “The Genius” comes from a rising female star from Zürich, Switzerland: Vanita. She became resident-DJ at the infamous Hive Club in her hometown in 2014. With recent releases on Hive Audio, Dear Deer, Einmusika & Katermukke, international gigs followed soon. Nowadays Vanita is also resident-DJ of the Katermukke showcases. We heard her play already a few times at Katerblau in Berlin where she blew us away, so we are really happy to have her on Chrom. She adds even more energy to the original in her typical style.

The man, or should we say bird, behind the remix of “The System” is our main artist from Australia, who is currently based in Frankfurt, Germany: Aves Volare. This DJ, producer, and vocalist is making big waves these days with current releases & collabs together with Teenage Mutants, Rafael Cerato, Citizen Kain, Niconé, The Note V, Heerhorst,… on labels such as Stil Vor Talent, Beatfreak, Ritual, Dear Deer, Manual, Katermukke, , Einmusika, and his own Aviary. His interpretation of “The System” is really fantastic.

And finally, we have Felix Ayerza from Buenos Aires, Argentina who made a remix of “The Gimmick”. Despite his young age, Felix already performed all over Argentina, the Warung Beach Club Tour in Punta del Este and the Miami Music Week to name a few. Felix is mainly releasing on his own label Condor Tunes, but for this track, he wanted to step out of his comfort zone and do a remix for us on Chrom. We are a big fan of the Argentinian touch on electronic music and with Felix, we finally have our first Argentinian artist on Chrom.”

+on all other major digital stores & streaming platforms

Any cookies that may not be particularly necessary for the website to function and is used specifically to collect user personal data via analytics, ads, other embedded contents are termed as non-necessary cookies. It is mandatory to procure user consent prior to running these cookies on your website.