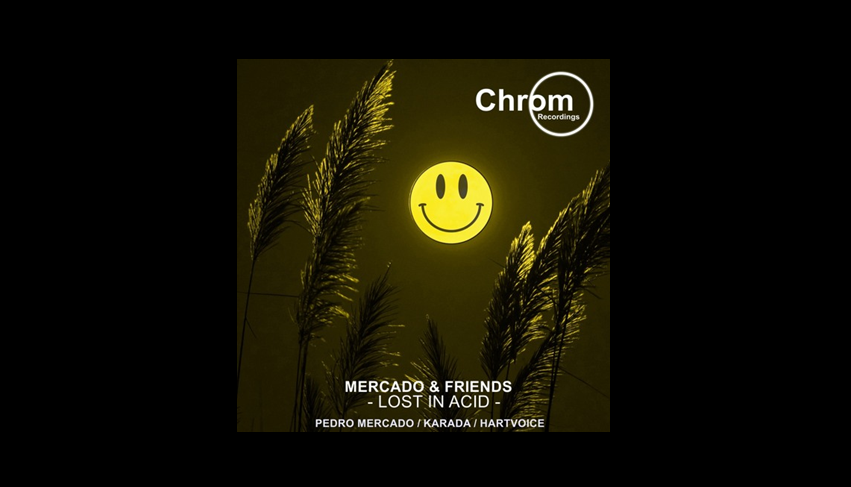 First of all, Chrom wishes you a happy new year !!! And we start 2020 with a bang: a very special EP from our label manager Pedro Mercado himself called “Lost in Acid” containing 4 tracks: 2 tracks together with Karda, 1 with Hartvoice and 1 solo production! This is the second EP in our special “Mercado & Friends” series where Pedro teams up with some of his producer friends. One year ago we released the first one which was called “Lost in the Jungle” where Pedro showed us his love for afro tribal sounds next to his melodic trademark. This time he takes us back to his roots. As a kid Pedro grew up in the Belgian New Beat & Acid Scene, first Acid House & Techno, later Acid Trance. That love for melodies is typical for his own productions during the last years, but now he adds some serious Acid influences in this EP, taking us back to the time of the Smileys, which definitely will put a smile on your face 🙂

The first 2 tracks “Acid on Mars” and “Cosmic Acid” are collaborations with his loyal Belgian studio partner Karada who has the same musical background & history as Pedro. It’s not the first time they use some Acid influences in their productions, only this time the Acid sounds are more prominent than ever before. With releases & remixes on quality labels such as Parquet, Kling Klong, Proton, Particles, Natura Viva, Manual, One Of A Kind, Dear Deer, Beatfreak,… and several spots in the Beatport Top 100 Charts, Pedro Mercado & Karada need no more further introduction.

The 3th track is a collab with Hartvoice, a duo from Mexico. Hartvoice is an electronic music project based in Mexico City, created by DJ Klang and Victor Rubin in 2015, with the aim of developing a characteristic sound fusing the groove of House, the deepness of Progressive and the power of Techno. Dj Klang has 40 years of experience in the world of electronic dance music, performed at the legendary Berlin Loveparade in 2001 & 2002, started the early Mexican electronic music band LLT and hosted some pioneering electronic music radio shows in Mexico City. Victor Rubin has over 12 years of experience, as a musician, DJ & audio engineer. He has produced, recorded and mixed many bands & artists from the electronic and contemporary music scenes and also has been involved in the composition and sound design for documentaries and short films As a DJ he has been very active in the electronic music scene in Mexico.

Last but not least is track number 4, a solo production from Pedro Mercado, which has been in the making for some years but is finally finished and completes this great EP. Pedro Mercado is known for his versatility, both in his productions and in his dj sets, which he shows us here again combining contemporay melodic house & techno with powerfull Acid sounds!